In 1940, beginners meetings formats were very different than they are today?

The formats are a forgotten piece of A.A. history.  Very few people today know about the four one-hour sessions that play such an important role in the initial success of our 12 Step movement.

These meetings were held throughout the United States and Canada during a period of time when A.A. enjoyed a 50%-75% recovery rate from alcoholism (today’s recovery rate lies approximately at 10%*).  Newcomers quickly learned “How It Works.”  They had conversion experiences, discovered a new way of living without alcohol, and carried their message of hope to others. 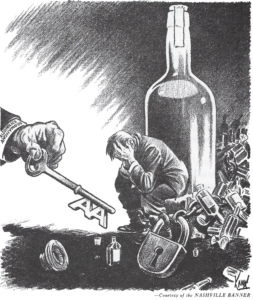 By taking the Twelve Steps in these Beginner’s Meeting, tens of thousands of A.A.’s found the spiritual solution to alcoholism.  They completed the Steps in about a month.  Then in order to ensure their own sobriety, they helped others through the recovery process.

In the 1940’s, there was little controversy surrounding the Beginners Meetings.  They served a very important purpose – to save lives.  Even Bill W., one of the co-founders of A.A., insisted that we let God rather than “control committees” guide us in our life-saving efforts.  In September 1945, he wrote an article for “The Grapevine” in which he stated if A.A. were to succeed, it must be governed by God rather than by rules or ruler makers:

“Were we to proceed by rules, somebody would have to make them, and more difficult still, somebody would have to enforce them.  ‘Rule-making’ has often been tried.  It usually results in controversy among the ‘rule-makers’ as to what the rules should be…  Our experience tells us that these universal truths (the 12 Steps) work.  (We are) ruled, not by people, but by principles…and, as most of us would say, (we are) ruled by God.”

This concept later became the cornerstone of A.A.’s Second Tradition, which states, “For our group purpose, there is but one ultimate authority, a loving God as He may express Himself in our group conscience.”  Throughout the Unites States and Canada during the 1940’s and 1950’s, many A.A. Groups were guided to start Beginner’s Meetings.  These meetings provided newcomers with a safe and structured environment in which to take the Twelve Steps and recover from alcoholism.

When Alcoholics Anonymous was first published in April 1939, the “Big Book” authors claimed that 100 had recovered from alcoholism since June 1935. This slow rate of growth was partially due to the lack of written instructions on the “course of action”:

Shortly after the publication of Alcoholics Anonymous, a fellowship evolved based on the principles of the book. The organization was so successful in providing a solution for the “hopeless state of mind and body” known as alcoholism that it received a considerable amount of public interest and support. This publicity resulted in increased books sales and membership:

Because of the rapid influx of people looking for a solution to their drinking problem, newly sober members had to grasp the basic principles of the program in a very short period of time. They were then pressed into service helping others through the 12 steps. This method was very successful as evidenced by the early recovery rates in Cleveland:

“Yes, Cleveland’s results were the best. The results were in fact so good, and A.A.’s membership elsewhere was so small, that many a Clevelander really thought A.A. had started there in the first place.  Records in Cleveland show that 93% of those who came to us never had a drink again.”

“We alcoholics are undisciplined.  So we let God disciple us in the simple way we have outlined.  But this is not all.  There is action and more action.  ‘Faith without works is dead.”